No written document of the 1978 revelation (priesthood to all worthy male members) has ever been produced, nor do participants claim that one exists. All participants have simply described a positive, overwhelming feeling after asking God what they should do about the priesthood ban on blacks. I think it is obvious that this revelation came in direct response to the pressure the church was receiving from potentially damaging lawsuits, media focus, and an ever-increasing negative image of the LDS Church in society (thus decreasing conversions, alienating existing members). While allowing blacks into the LDS priesthood was a positive step forward for the church, only the truly indoctrinated Mormon could possibly believe the change occurred by a real revelation from God which just happened to coincide with unprecedented scrutiny the LDS Church was receiving from outside forces. Even more obvious is the fact that LDS prophets do not speak with God. If they did, certainly they would be able to show their members the words of God.  Every LDS prophet claiming to have received revelation has been able to produce a written document purporting to be the words of God. 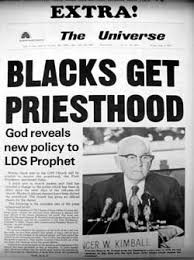