“One of the witnesses to the Book of Mormon, yielded to the spirit and temptation of the devil a number of years ago – turned against Joseph Smith and became his bitter enemy. He was filled with the rage and madness of a demon. One day he would be one thing, and another day another thing. He soon became partially deranged or shattered, as many believed, flying from one thing to another, as if reason and common sense were thrown of their balance. In one of his fits of monomania, he went and joined the ‘Shakers’ or followers of Anna [Ann] Lee. He tarried with them a year or two, or perhaps longer, having had some flare ups while among them; but since [James] Strang has made his entry into the apostate ranks, and hoisted his standard for the rebellious to flock too, Martin leaves the ‘Shakers,’ whom he knows to be right, and has known it for many years, as he said, and joins Strang in gathering out the tares of the field. We understand that he is appointed a mission to this country, but we do not feel to warn the Saints against him, for his own unbridled tongue will soon show out specimens of folly enough to give any person a true index to the character of the man; but if the Saints wish to know what the Lord hath said to him they may turn to the 178th page of the Book of Doctrine and Covenants, and the person there called a ‘wicked man’ is no other than Martin Harris [see sections 3:12 and 10:1,7], and he owned it then, but probably might not now.

“Just as our paper was going to press, we learned that Martin Harris, about whom we have written in another article, had landed in Liverpool, and being afraid or ashamed of his profession as a Strangite, and we presume both, for we are confident we should be, he tells some of our brethren on whom he called, that he was of the same profession with themselves – that he had just come from America and wished to get acquainted with the Saints. But  there was a strangeness about him, and about one or two who came with him, that gave them plainly to see that the frankness and honest simplicity of true hearted brethren were not with them. A lying deceptive spirit attends them, and has from the beginning. They said they were of the same profession with our brethren, when they knew they lied. If they were of our profession, why call at our office and get their papers endorsed? Because they know that they are of their father, the Devil, who was a liar from the beginning, and abode not in the truth. The very countenance of Harris will show to every spiritual-minded person who sees him, that the wrath of God is upon him.” 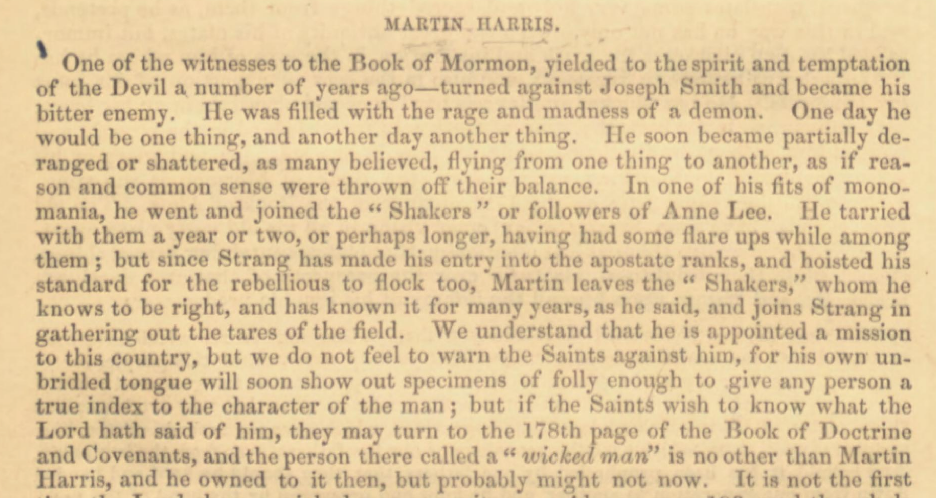