“Angels are those beings who have been on an earth like this, and have passed through the same ordeals that we are now passing through. They have kept their first estate far enough to preserve themselves in the Priesthood. They did not so violate the law of the Priesthood and condemn themselves to the sin against the Holy Ghost as to be finally lost. They are not crowned with the celestial ones. They are persons who have lived upon an earth, but did not magnify the Priesthood in that high degree that many others have done who have become Gods, even the sons of God.” 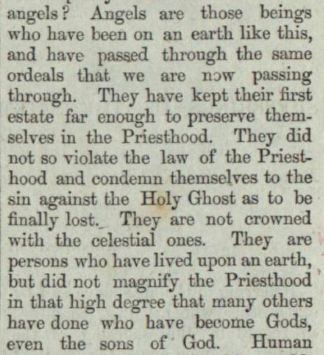