“How much unbelief exists in the minds of the Latter-day Saints in regard to one particular doctrine which I revealed to them, and which God revealed to me – namely that Adam is our father and God – I do not know, I do not inquire, I care nothing about it. Our Father Adam helped to make this earth, it was created expressly for him, and after it was made he and his companions came here. He brought one of his wives with him, and she was called Eve, because she was the first woman upon the earth. Our Father Adam is the man who stands at the gate and holds the keys of everlasting life and salvation to all his children who have or who ever will come upon the earth. I have been found fault with by the ministers of religion because I have said that they were ignorant. But I could not find any man on the earth who could tell me this, although it is one of the simplest things in the world, until I met and talked with Joseph Smith.” 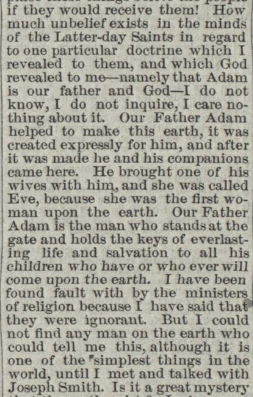