Well known LDS historian and general authority (45 years in the First Council of the Seventy), B.H. Roberts explained that there are undeniable links between the View of the Hebrews by Ethan Smith (local writer and minister of Oliver Cowdery’s church) and the Book of Mormon. Roberts writes:

“In light of this evidence, there can be no doubt as to the vividly strong, creative imagination by Joseph Smith, the Prophet, an imagination, it could with reason be urged, which, given the suggestions that are to be found in the ‘common knowledge’ of accepted American antiquities of the times, supplemented by such a work as Ethan Smith’s View of the Hebrews [1st published in 1823 and re-published in Palmyra, NY, in 1825], would make it possible for him to create a book such as the Book of Mormon is.” 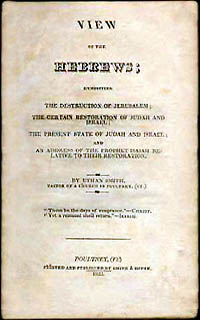